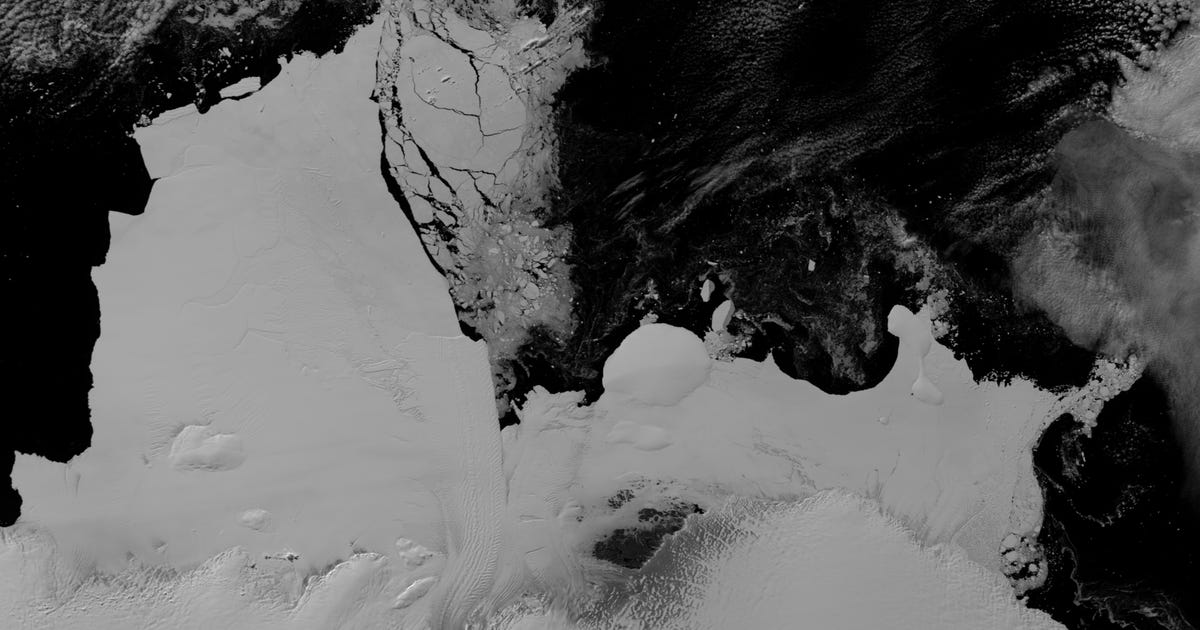 Satellite imagery has captured the dramatic end of a large ice shelf in East Antarctica.

The Conger ice shelf, which sits off the East Antarctic coast adjacent to the much larger Shackleton ice shelf, completely collapsed on March 15. The shelf was around 1,200 square kilometers, only a little smaller than Los Angeles and about a third of the size of the Larsen B ice shelf, which disintegrated in 2002.

Catherine Walker, an Earth and planetary scientist at the Woods Hole Oceanographic Institute and NASA, tweeted satellite imagery obtained by the Landsat and MODIS satellites on Thursday. The GIF shared by Walker  shows the shelf slowly recede leading up to March 14 and then the next image, from March 16, shows it has completely fractured.

“The Conger ice shelf was there and then suddenly it was gone,” said Andrew Mackintosh, an ice sheet expert and head of the school of Earth, atmosphere and the environment at Monash University in Australia.

Ice sheets are critical to holding back the flow of ice on the continent into the sea. “If they collapse, then ice flow from inland accelerates and leads to sea level rise,” he said.

If you’ve been keeping an eye on the icy southern end of the Earth lately, you’re probably aware that Antarctica has recently experienced some unusually extreme heat. At Concordia Station, a joint Italian-French base in East Antarctica, temperatures hit a high of minus 11.8 degrees Celsius in mid-March. Cold, yes, but about 30 degrees warmer than the usual average at this time of year.

The heat was brought about by an “atmospheric river,” a huge stream of warm air that rolled over the region. It’s hard to know whether the high temperatures in the Antarctic led to the collapse of the ice shelf, but scientists will need to examine how the extremes have altered the environment around Conger.

“We need to better understand how the warm period has influenced melt along this whole sector of East Antarctica,” Mackintosh said.

Antarctic research has mostly focused on West Antarctica, because it’s much more accessible and has been the focus of well-resourced expeditions from the US and British Antarctic divisions. But the extreme warming during March has thrust East Antarctica into the spotlight and revealed a need to more thoroughly understand the region and its response to human-induced climate change.


Get the CNET Now newsletter

Spice up your small talk with the latest tech news, products and reviews. Delivered on weekdays.