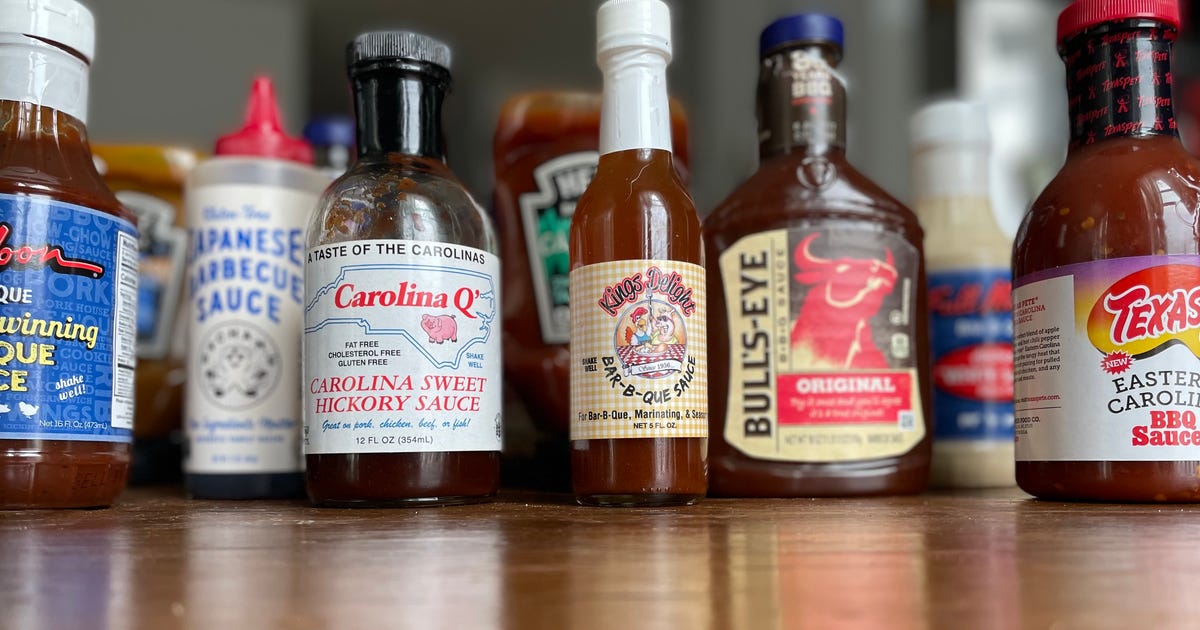 Just because grilling season is over doesn’t mean you shouldn’t continue adding some BBQ flavor to your food. After all, you don’t have to take barbeque off of the menu just because the temperature drops. If you’re willing to brave the cold, you can enjoy barbecue all year long, especially if you stay well-stocked with some delicious bottles of barbecue sauce. So slip on your snow boots, crack those bad boys open and fire up the grill or smoker. Everything tastes better when you’re using the best sauces that 2022 has to offer.

When finding that perfect barbecue sauce, the options are plentiful. You’ll find dozens of tangy and sweet sauces in the market and loads more are available from smaller producers online. To find the best barbecue sauce for 2022, I’ve been grilling, squeezing and finger-licking up a storm. I personally gathered 15 bottles of sweet, spicy, smoky and vinegary sauces along with several enthusiastic barbecue-loving friends for an ultimate sauced-up showdown.

A quick note: Up north, sweeter varieties dominate the sauce market, but my taste testers and I all enjoy vinegar-based sauces too, so we included several Carolina barbecue sauces (among other styles) to make this list as inclusive and unbiased as possible.

What makes a great barbecue sauce?

It’s all relative, but most pitmasters agree that balance is key to a great barbecue sauce. Most sauces are made with a tomato base, vinegar, some sweetener like honey or molasses and an element of heat. From there, sauces are fine-tuned with spices and flavors, such as mustard, garlic, fruit and smoke. Any sauce that’s too overwhelming in any one direction usually doesn’t work well. And super simple sauces without much spice or complexity often fall flat.

We tasted many traditional Kansas City-style sauces for this list, a host of vinegar-heavy Carolina-style sauces, some keto-friendly sauces, Bachan’s cult-favorite Japanese-style sauce and a few Alabama white sauces to see which ones really tickled our taste buds. We tried each one with plain unseasoned chicken breast since it’s a rather blank slate as far as classic grilled foods go. When tasting, we noted things like overall balance, heat, sweetness, overwhelming flavors or anything else that jumped out — both bad and good.

It took a lot of napkins to find the best barbecue sauce in 2022. Here they are.

Full Moon is a regional chain of barbecue restaurants in Alabama and Mississippi that’s been in operation since 1986. You won’t likely find Full Moon’s incredible sauce on store shelves, but it can be purchased online for just $7.49 per bottle. Thank goodness for that because this classic-style sauce has a near-perfect balance of sweetness, smokiness, tang and spice.

If you prefer to scoop your barbecue sauce up from the store, Stubb’s stuff can be found in most supermarkets and it’s an excellent alternative to Full Moon. Like the winner above, Stubb’s has a good balance with no single flavor taking over. This one is thick but not gloppy and gets its sweetness from brown sugar (no corn syrup) with a good kick from lots of black pepper.

I’ve been on the Bachan’s bandwagon for some time now and I don’t plan on hopping off. Bachan’s is atypical compared with classic barbecue sauces in that it’s laced with Japanese flavors, giving it a huge umami punch. You’ll notice soy sauce immediately, along with sesame, ginger and a delicate sweetness. This is one of the thinner sauces so it might not adhere as well to ribs and chicken or caramelize as others do, so it’s probably best used as a finishing sauce.

Bachan’s is also pricey at $13 for one bottle, but snag two and the price drops to $12 each. (Trust me, you’ll want more than one bottle.)

This rich, dark and smoky sauce is made by a small producer in North Carolina. It’s probably the most flavor-packed sauce we tried, with a big sweetness that’s cut with rich, smoky hickory and lots of heat. There’s a lot going on here but it harmonizes nicely to create one very tasty sauce.

At under $3 a bottle, this was the favorite of the “cheap” barbecue sauces, and it’s one you’ll find easily in most grocery stores or on Amazon. Bull’s-Eye has a formidable sweetness but gets great balance from mustard, garlic and natural hickory smoke. If you go through sauce like water, this is a great sauce to stock up on for ribs, chicken and burgers.

If you’re a hot sauce junkie looking for a barbecue sauce, Texas Pete’s Eastern Carolina sauce is the one to get. Texas Pete is a hot sauce maker, first and foremost, and so this spin on vinegar-heavy Carolina-style sauce tastes quite a bit like hot sauce but with a subtle sweetness and tomato tang. It’s made with just five ingredients and no corn syrup. At 15 calories per serving, it’s probably the “healthiest” barbecue sauce on this list.

I’ll be honest, this wasn’t one of my personal favorites, but some of the other tasters with a penchant for sweeter foods were really into it. Sweet Baby Ray’s (hey, it’s right there in the name) is made with corn syrup and pineapple juice and is so sweet it can be overwhelming. It’s also rather thick, almost like a barbecue jam or jelly. If you’re a barbecue lover with a sweet tooth, this is the sauce you should stock. Plus, it’s cheap at just $2 per bottle.

Other BBQ sauces we tried that didn’t make the cut

More of our backyard barbecue favorites

Share
Facebook
Twitter
Pinterest
WhatsApp
Previous article
Should you customize your DualSense? Here’s how it went for me.
Next article
A startup says it’s begun releasing particles in the atmosphere, in an effort to tweak the climate