HomeAllTechNewsFood Prices Aren't Going Down. How Community Fridges and Food Banks Are...
TechNews

Food Prices Aren’t Going Down. How Community Fridges and Food Banks Are Stepping In 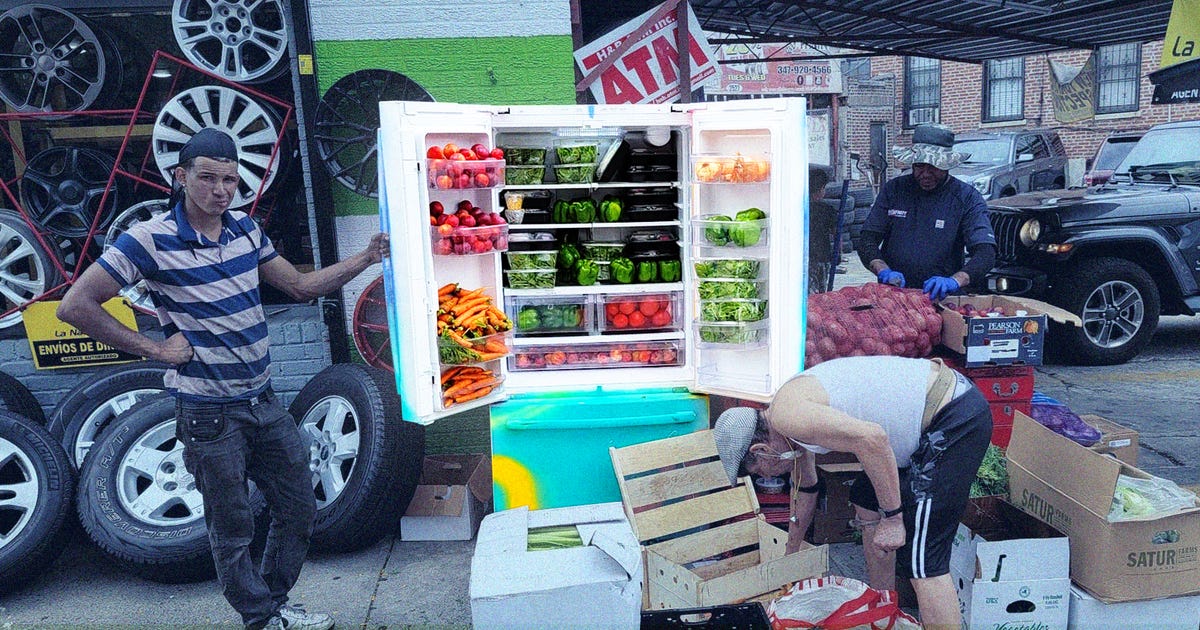 This story is part of Priced Out, CNET’s coverage of how real people are coping with the high cost of living in the US.

For Jamie Siracusa, the rising price of food means fewer grocery items can go toward restocking the community fridge she runs in Brookline, a suburb of Boston.

Community fridges are refrigerators located in public spaces where anyone can contribute or take free food. Siracusa said there’s usually a natural ebb and flow in demand in the neighborhood, but during some days this year the need has been overwhelming. In October, Siracusa bought enough groceries to fill up the fridge twice. In both instances, the food was completely gone within hours.

“The demand is higher than we’ve been able to provide,” Siracusa said.

Though inflation is showing signs of cooling, food prices remain higher than they’ve been in decades. In October, the price of groceries rose by more than 12% over the last year, according to the latest Consumer Price Index. Some basic food items have gone up drastically: The retail price of eggs is some 40% higher than it was in October 2021.

More than 13 million households in the US were food insecure in 2021, according to the USDA’s annual food insecurity report. That means one in 10 households are struggling to provide an adequate amount of food for their families.

Everyone is paying more to eat these days, but not all consumers are being equally squeezed. High prices for supermarket staples are hurting low-income families and communities the most, requiring large sacrifices and novel ways to find affordable food.

Mark Mraz, a Boston resident, is a retiree living off a fixed income. With rising food costs leaving less room for other expenses, he stops by the Brookline Community Fridge once in a while to supplement his meals. Though he tries to find the best deals by comparing prices at different supermarkets, food still takes up more of his budget than in years past.

“My nest egg is holding, but it’s shrinking,” said Mraz. “This community fridge is a nice resource. It’s very helpful with stretching my budget. Every little bit helps.”

Emmanuel Carvajal, who lives in the Bronx, New York, works two jobs to provide for himself and his son, but it isn’t enough to live comfortably. Items he used to buy with higher price tags are now even more expensive. Oftentimes, it isn’t something Carvajal can just cut out, such as soy milk, since he’s allergic to regular milk. Carvajal occasionally uses the Allerton Allies Community Fridge in the East Bronx to help ease the burden.

“That’s just the basics. We don’t even go out to eat,” said Carvajal. “Between car payments, supporting my son and food, it’s not enough.”

Community fridges, which exploded during the pandemic and now number in the hundreds across the country, are especially critical in Black, Latino and low-income neighborhoods to service vulnerable and disadvantaged households. More Americans are also turning to food banks for the first time in their lives. Feeding America, a nonprofit network of more than 200 food banks, recently found that 65% of food banks in its network have seen an increase in people turning up at their door.

“These are families and individuals that spend more of their disposable income on food than some of the wealthier Americans,” said David Ortega, a food economist and associate professor at Michigan State University. A study by the US Department of Agriculture found that the poorest 20% of American households devote a larger share of their annual income — between 28.8% and 42.6% — to food, compared with the highest-income households, which spend 6.5% to 9.2% on food.

Where food prices are headed

A confluence of global and local circumstances has pushed food prices through the roof in recent years.

The supply bottleneck from the COVID-19 pandemic, adverse weather due to climate change, and the war in Ukraine, which has disrupted wheat production and exports in the region, are all major factors affecting food costs, according to experts. The increased price of natural gas, which impacts the cost of fertilizer and transporting goods, has also exacerbated the problem.

It’s no easy feat to tell if food prices will continue to soar or if they’ll ease anytime soon, especially since food prices are a lagging measure of current conditions. That means while we might have had a bad drought this year, you won’t see the effect of that on prices until next year.

Economists already have a tough time predicting prices when things are stable, and these days are anything but. Still, the outlook doesn’t seem good, at least in the short term, according to Ortega.

Experts say prices will remain high in the coming months, and perhaps for the next year. Even if the rate of inflation starts to cool off, that doesn’t mean food will be cheaper or that prices will go back to the levels they were at before they started rising. That matches the USDA’s prediction that food prices will remain above historic averages and increase another 3% to 4% in 2023.

“In order for us to start to see these numbers decrease, we’re going to have to address some of the underlying factors,” Ortega explained.

How to help lessen the pain of soaring food prices

The US is facing an affordability crisis, with everything from housing to health care becoming more expensive. The intersection of rising prices for basic necessities and services, along with slow wage growth, is leaving the majority of American budgets with little to no wiggle room.

There isn’t one definitive way to cut everyday food costs, but there are some things to help lessen the impact of rising food prices on a household budget.

Still, there’s only so much you can do to save money at the grocery store. If you don’t have room in your budget to afford groceries, there are federal food programs and community resources you might be able to tap into.

You can go to Feeding America to find a local food bank. Or, if you want to find a local community fridge that provides free food, use this spreadsheet made by Freedge or this Fridge Finder map. Full Cart, a nonprofit, virtual food bank, will cover the cost of food and ship it directly to your front door discreetly. Anyone can register after answering a few questions, though there’s a waitlist that could take a couple of months.

The US Department of Agriculture also maintains a host of food assistance programs, including SNAP benefits and child nutrition programs, that you might be eligible for. Feeding America will help you fill out the applications for some of those programs. Your local food bank, like Greater Boston Food Bank, may also offer step-by-step assistance with SNAP applications. And if you’re a senior, you might qualify for Meals on Wheels, which will provide you with one meal every day for any amount you’re able to contribute.