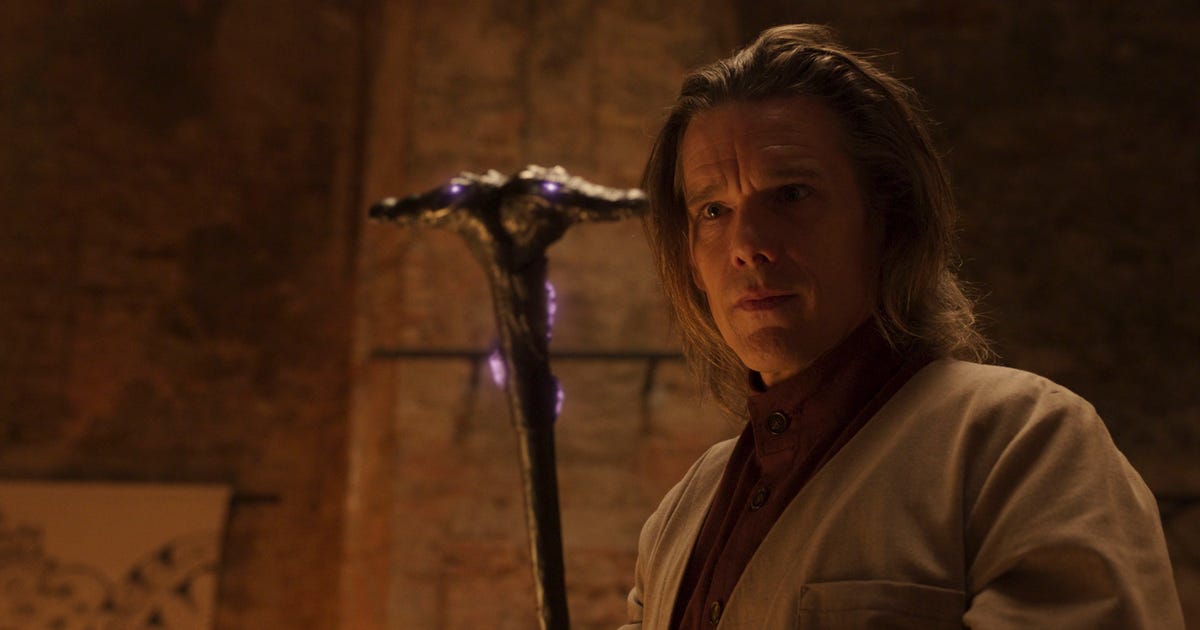 This unpleasant deity judges people based on their past and future actions to determine if they’re worthy of living, instantly sapping the life force of those she deems to be sinners or would-be sinners.

Steven also realized that he has another personality, the badass Marc Spector. This guy is capable of becoming the cloaked hero Moon Knight, and Steven surrendered his body to Marc so he could fight off a monster summoned by Harrow.

Let’s step into SPOILER town as Steven/Marc faces the consequences of his actions. This show takes place after the events of Avengers: Endgame.

Fleeing Harrow’s clutches once again and knowing that his powers come from Egyptian moon god Khonshu, Steven refuses to surrender his body to Marc. Instead, he conjures up a more dapper costume — one that includes a white suit and mask. It’s probably good that they’re magic, because they’d be impossible to keep clean.

In the comics, this persona is known as Mr. Knight and operates as an alternate personality for Moon Knight. He consults with police about crimes and operates more like a subtle detective rather than a violent vigilante (though he’s capable of aggression too).

The show’s take suggests this look is a manifestation of Steven’s take on a hero — more suave and pristine than the down-and-dirty Marc. However, the inexperienced Steven can’t quite beat the jackal summoned by Harrow — a jackal only he can see — so he lets Marc take over to do the deed as Moon Knight.

Unfortunately, Harrow still managed to get hold of the scarab that’ll lead him to the place where Ammit is trapped. The episode ends with Marc waking up in Egyptian capital Cairo, looking out at the Great Pyramids on the Giza Plateau — presumably Ammit is buried somewhere in the area.

Earlier on, Steven tracks down a storage locker maintained by his other persona. It’s full of classic espionage essentials like cash and guns, along with a US passport for Marc Specter.

Marc acts as the avatar for Egyptian moon god Khonshu — confirmed shortly afterward to be the scary giant bird mummy that hounded Steven in his apartment building — becoming the superhero Moon Knight.

“We protect the vulnerable and deliver Khonshu’s justice to those who hurt them,” says Marc.

When Steven is arrested by two police officers in Harrow’s employ, they tell him that Marc was part of a mercenary team who attacked an Egyptian dig site and mercilessly killed the innocent archeologists.

It’s likely that this incident mirrored the comics, in that Marc was disgusted by the brutality and turned on his team. After being mortally wounded by his former allies, Marc dies in front of a statue of Khonshu and is revived with a directive to serve as the “moon’s knight.”

Getting to know Khonshu and Harrow

Harrow complicates the narrative by revealing that he was Khonshu’s previous avatar. It’s unclear exactly why they parted ways, but Harrow believes the moon god’s judgment comes too late — he wants to resurrect Ammit, who’d judge people before evil is done and create “heaven on Earth.”

He’s pretty compelling and charismatic, even managing to use a fragment of Ammit’s power to gather enough followers to turn a crime-ridden area of London around. It’s now a super safe place for them to listen to Bob Dylan, learn Mandarin and make lentil soup.

Steven kinda pops his bubble by comparing Ammit’s pre-judgement to child murder, which is always the wrinkle with these Minority Report-style approaches to justice. They suggest we have no free will.

The villain also notes that Khonshu chooses people with a strong moral conscience, and suggests that the god chose Marc because his mind “would be so easy to break or because it was broken already.” He says the other gods banished Khonshu, but it’s unclear why.

In the comics, Harrow is totally different and only ever appeared in one issue, back in 1985. He was a candidate for the Nobel Prize in medicine due to his research into pain theory, but the scientist’s work was built off experiments of Nazi scientists in the infamous Auschwitz concentration camp during World War II. He was also kidnapping local farmers to experiment on.

Which is all pretty awful. Despite this, Harrow was determined to use this work to cure his trigeminal neuralgia, a long-term pain disorder which paralyzed the left side of his face and left him with a permanent snarl.

Horrifyingly enough, he also gets away at the end of the issue, apparently free to continue his experiments elsewhere. Maybe send Moon Knight after this guy in a comic in the next six months Marvel?

This episode also introduces Layla El-Faouly (May Calamawy), a contact of Marc’s that previously spoke to Steven on the phone. It turns out that she’s Marc’s wife, and they “fought side by side” to get the scarab.

It would also seem that Marc subconsciously took elements of Layla’s personality and interests when he created his Steven Grant personality — both have knowledge of hieroglyphic symbols and each claims the French poet Marceline Desbordes-Valmore as their favorite.

Desbordes-Valmore lived from 1786 to 1859, and the poem they recite together is Les Séparés (Apart).

“Do not write. I am sad, and I would like to die out,” they say in French. “The beautiful summers without you are the night without a torch.”

Marc may have retreated into Steven out of guilt for his actions as a mercenary, and used aspects of Layla because he thinks she’s worth aspiring to. Khonshu also wants Layla as his new avatar, and uses that as a threat to keep Marc under his power.

Join us for another recap April 13, when episode 3 of Moon Knight hits Disney Plus.