New Jackery 1000 Pro Does Something Few Other Solar Generators Can 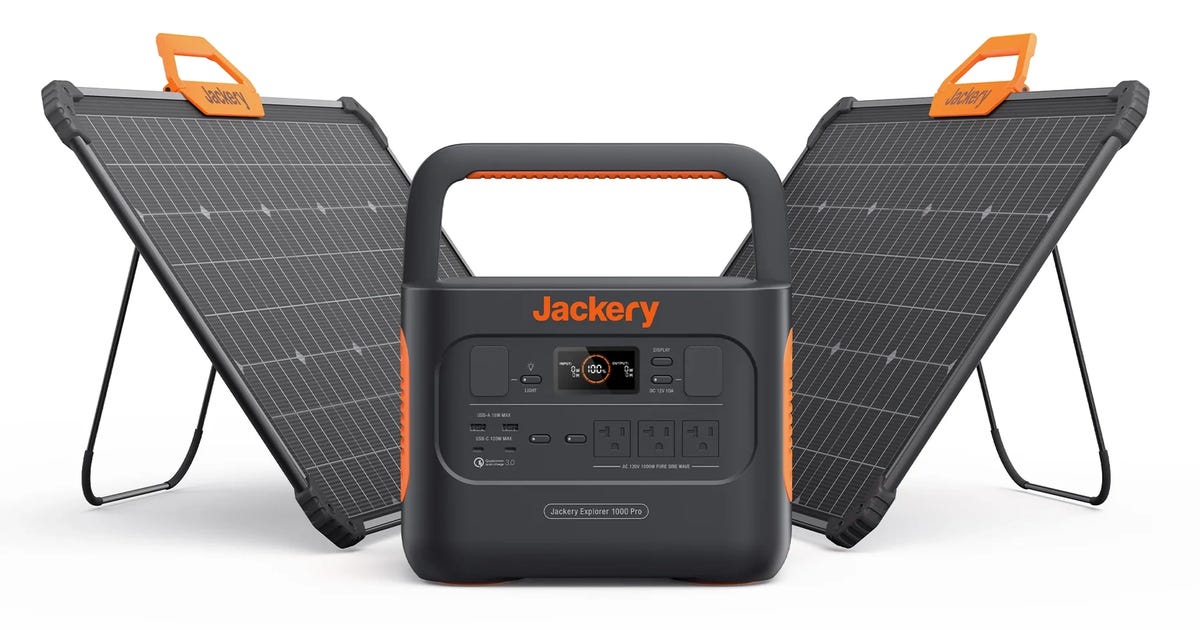 Solar generators seem to be entering a golden era, and the Jackery 1000 Pro is a good example of why: Serious power, comfortable portability and a potent set of available solar panels that can charge the unit from the sun as rapidly as from a wall outlet. The system is much more expensive than the iconic Honda EU2200i gas-powered generator but may be worth it if you value real self-sufficiency and nearly silent power that’s easy to trot out for convenience as well as survival.

What is a solar generator?

I still struggle with the term “solar generator.” They don’t generate power like a gas-fueled unit but rather, store it from other sources to power your gear. In the case of the Jackery 1000 Pro, those charge sources can be a wall outlet, a 12-volt car outlet or solar panels. Even at its fastest, its recharge time is nowhere near that of a gas generator which takes a minute to “recharge,” but in an era saturated with phones and Teslas, I suspect the market is inevitably tilting toward an electronic power backup rather than one based on a combustion engine.

However you choose to use the 1000 Pro’s power you can draw it from four types of outlets:

To the chagrin of preppers and hams (and me), the 1000 Pro lacks Anderson Powerpoles, a type of DC power connector that’s favored by many serious or more technical users but which is admittedly obscure among average consumers.

There are three ways to charge the 1000 Pro:

The 1000 Pro stores a charge in lithium-ion batteries coupled with management electronics that Jackery claims will allow 1,000 charge cycles before noticeable degradation, a big jump from the 500 rated charge cycles of the last Jackery unit I explored. If you use the 1000 Pro rarely, its batteries may last longer than you do, but if you make it the center of an off-the-grid lifestyle you’ll get years out of it, not a lifetime.

Note that Jackery rates those 1,000 charge cycles as 80% charges, not 100%, which brings up the reality of all lithium-ion batteries: You have to take care to get the most out of them, and sometimes that means getting less out of them. The rules of thumb are:

These best practices will vary per each product’s internal management electronics, but you can hardly go wrong following them with any make or model of backup battery power.

Importantly, Jackery claims that the 1000 Pro will retain 80% of its charge after sitting for a year under appropriate temperature conditions, well above the 50% to 60% that I expect from most of my storage batteries.

Other niceties include a built-in LED light because, well, everything has one today. But this one is nicely lensed for even illumination and can really light up the space where it’s aimed. Press the button three times and it blinks a continuous SOS.

The internal fans on the 1000 Pro run quiet at 46db, barely audible even when I had it powering work lights on a hot day.

The 1000 Pro weighs 25 pounds, a crucial 10 pounds less than the bigger Explorer 1500 I recently tested. The difference is not just 10 pounds but the difference between easy portability and dread. The flip-up handle is more comfortable than a fixed hand grab, and the overall design of the unit is rather whimsical rather than the cyber-macho look of too many products in this category.

Time to sell your gas generator?

Being able to solar charge at the same rate as a wall outlet is impressive, but it costs. The 1000 Pro alone lists for $1,099, but when bundled with four of those SolarSaga 200W panels to get that charge rate, the price jumps to $3,999. A smaller set of 80W solar panels is available in a package priced at $1,597 but extends the solar full charge time to an uninteresting 9 hours.

Unless you have a clear calculated need for more power and capacity than the 1000 Pro’s 1,000 watts and watt-hours, I would avoid getting anything heavier. Unless you’re out in the woods steampunking it with incandescent Edison bulbs and a vintage electric ice cream maker, this unit deserves consideration.