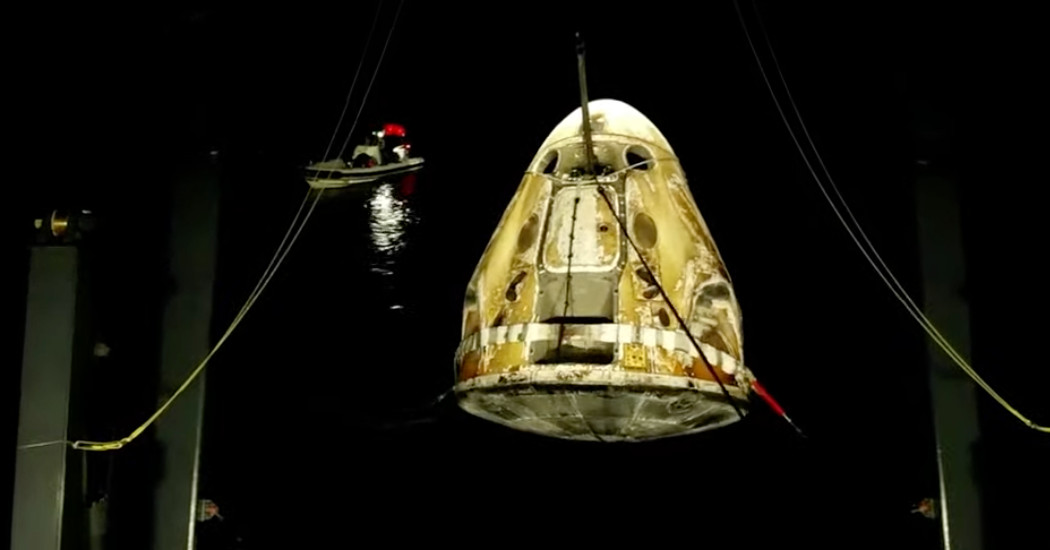 Four astronauts successfully returned home to Earth in a SpaceX Crew Dragon spacecraft today, bringing an end to their six-month-long stay on the International Space Station (ISS). After undocking from the ISS early Thursday morning, the crew dove through Earth’s atmosphere before splashing down underneath parachutes off the coast of Florida at 12:43 AM ET.

On board the Crew Dragon were three NASA astronauts — Tom Marshburn, Raja Chari, and Kayla Barron — as well as German astronaut Matthias Maurer with the European Space Agency. The astronauts, part of a mission called Crew-3, launched to space in the same Crew Dragon back in November. Since docking with the ISS, they’ve been living and working on the orbiting lab, conducting science experiments and maintaining the station through spacewalks.

The Crew-3 astronauts have had a rather eventful stay in space, too. Shortly after they arrived at the ISS, Russia destroyed one of its own satellites with a ground-based missile, creating a cloud of debris that initially threatened the integrity of the space station. Immediately following the satellite’s destruction, the Crew-3 astronauts and Russian cosmonauts aboard the ISS had to shelter inside their spacecraft in case the resulting debris damaged the space station and they needed to make a quick getaway. Fortunately for the station inhabitants, the debris did not harm the ISS, and the crew was able to return to a normal work schedule.

A few months after that incident, Russia then invaded Ukraine, increasing tensions between the United States and Russia on Earth. That led many to question the stability of the ISS partnership between NASA and Russia’s state space corporation, Roscosmos, and there were concerns that operations on board the space station might be affected. Ultimately the Crew-3 astronauts continued their work as planned along with their Russian colleagues, and they even welcomed a new crew of Russian cosmonauts to the station in March. While the head of Roscosmos, Dmitry Rogozin, continues to hint about a possible end to Russia’s ISS agreement, NASA administrator Bill Nelson assured Congress on May 3rd that it was business as usual on board the ISS and that Russia has not yet pulled out of the partnership.

Crew-3’s safe return marks the end of another routine human spaceflight mission to the ISS for both SpaceX and NASA. SpaceX holds a contract with NASA to periodically send astronauts to and from the International Space Station, part of an initiative called the Commercial Crew Program. Crew-3 was SpaceX’s third operation mission to the ISS for NASA as well as the company’s eighth time launching astronauts to space.

Now that Crew-3 is safely back on Earth, SpaceX and NASA’s next mission will begin in earnest. On April 27th, three NASA astronauts and an Italian astronaut with the European Space Agency launched to the ISS on another Crew Dragon, part of SpaceX’s Crew-4 mission. The Crew-3 astronauts were on board to greet them and help familiarize them with the ISS. The Crew-4 astronauts are slated to remain on the ISS until the fall.