The Best ISPS in Charlotte, NC 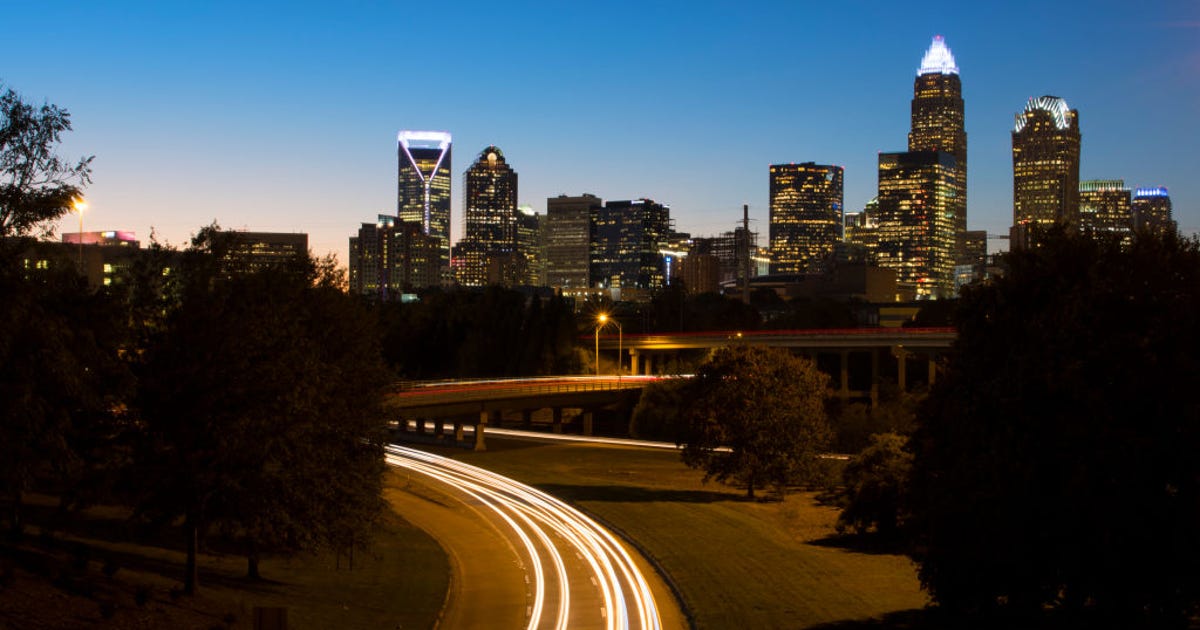 As a lifelong Charlotte-area resident, I remember when Time Warner Cable was the option for internet. Home internet options in Charlotte now are about the same as any city: One or two cable internet providers and one or two fiber internet providers. With Charlotte, that cable option is going to be Spectrum, which is still technically TWC, but has changed over to Spectrum since being acquired by Charter. For fiber service, AT&T will be your best bet, but you may find Google Fiber or Kinetic by Windstream available as well, depending on where you live in the Queen City.

Charlotte also has the unique option of 5G home internet service from T-Mobile, which is currently available to roughly half of the area’s households. There are other internet options, of course, such as DSL and satellite internet, but I won’t waste your time with those, and to be honest, you shouldn’t either. Here’s a look at the best internet providers in the Charlotte area.

AT&T offers internet throughout much of Charlotte, but there are some pockets, such as to the west around CLT-Douglas and around the University area, where AT&T might be unavailable.

Most AT&T-serviceable households in the area are eligible for fiber service, which now has the potential to deliver up to 5,000Mbps, making AT&T the fastest internet provider in Charlotte. If that’s more speed than you need, AT&T Fiber has a variety of other high-speed, high-value plans, all of which come with unlimited data, no contract requirements and no additional Wi-Fi equipment costs.

AT&T’s fiber network hasn’t fully covered the Charlotte area yet, so it’s possible your address is only available for AT&T Internet, a DSL-based service. Pricing is still comparatively low with AT&T Internet starting at $55 per month, but speeds can vary and DSL is a less-reliable connection type in general. In short, I’d recommend considering other Charlotte internet providers if your home is only serviceable for DSL.

Going with Google Fiber for your home internet service in Charlotte comes down to two questions: “Is it available?” and, “Do you want gigabit internet?” If the answer to both is yes, then Google Fiber will probably be your best bet.

The availability part may be a challenge as the provider is only currently offered to around 10% of Charlotte households. You’ll have the best odds of getting service if you live in or are moving to northeast Charlotte just below Concord Mills or the Southpark area, but there are random spots in Uptown and around Charlotte that are also serviceable. If you’re lucky enough to have an address serviceable for Google Fiber, it’s definitely worth considering.

Google Webpass, a high-speed fixed wireless service popular in apartments and other multi-unit buildings, is not available in Charlotte.

Spectrum’s biggest selling point in Charlotte is availability. The cable internet provider is available to 100% of Charlotte households, which can make it easier to sign up for internet service and then transfer it when you move, wherever that happens to be in the city.

Cable providers often get a bad rap, perhaps deservedly in some cases, but Spectrum is actually a solid choice for home internet in Charlotte. Speeds are decent and the pricing is reasonable, though I think there’s room for the gig service to drop some in price. Service terms are also favorable, as all Spectrum plans come with unlimited data, no contract requirements and a free modem.

Make note: That’s a free modem, but not a free router, which is what you’ll need to connect wirelessly, over Wi-Fi. A router rental is only $5 extra, or you can supply your own and skip the fee.

Spectrum is definitely one of your better internet options in Charlotte, but it’s still cable internet. That means significantly slower upload speeds than fiber service, as well as the potential for reduced speeds during peak usage times. The cable connection does, however, make Spectrum a good choice for bundling internet and TV service.

The arrival of 5G has brought some much-needed competition to the home internet market, particularly in suburban and rural areas, but it still has a way to go before it’s really competing with cable or fiber internet.

At $50 per month for speeds up to 115Mbps, T-Mobile’s 5G home internet service makes sense if you’re just outside the Charlotte city limits, say down in Lancaster, South Carolina or out in a rural part of Rowan County. But if you’re in Charlotte or Mecklenburg County, you’ll likely have at least one other faster, wired connection available such as Spectrum or AT&T.

Still, maybe you’ve tried either or both of those providers, or others in the Charlotte area, and just aren’t satisfied with the service. In that case, it may be worth exploring 5G home internet from T-Mobile. You’ll only have one plan option, $50 per month for the fastest speeds available at your address, but it comes with everything you need, including equipment and unlimited data, at no extra cost. There’s also no contract, so you can try it out essentially risk-free to see if you’re ready to replace your wired connection with a wireless one.

What other internet options are there in Charlotte?

These providers may be available to parts of Charlotte, but they likely won’t be your first or even second choice for home internet unless you live just outside the city.

Satellite service from HughesNet and Viasat is also available throughout most of Charlotte and the surrounding area, but again, with plenty of other internet options available, satellite internet is not worth the cost.

A closer look at home internet in Charlotte

Cost and speed are often the two most important factors when choosing a home internet service, but there are others like data caps and contracts that you’ll want to take into consideration as well.

So, how do Charlotte internet providers stack up? Here’s a look at what to expect when shopping for cheap or high-speed internet plans in Charlotte, as well as the conditions that come with signing up.

The two largest Charlotte internet providers, AT&T and Spectrum, have the same starting price of $55 per month, but Spectrum will be $5 cheaper if you choose to use your own equipment. After the first year, lookout for a price increase of up to $25 per month from Spectrum that will give AT&T the clear pricing advantage.

What’s the cheapest internet in Charlotte?

Every household needs a broadband connection, but unfortunately not every household can afford one. To help with broadband internet accessibility in low-income Charlotte households and communities, the North Carolina Department of Information and Technology recommends seeking assistance from the FCC’s Affordable Connectivity Program.

Per the NCDIT, the program provides a $30 per month benefit to help qualifying Charlotte households afford access to high-speed internet service, plus a one-time discount of up to $100 for a laptop, tablet, or desktop computer. For more information, see Trey Paul’s article on what the Affordable Connectivity Program is and how to apply.

Charlotte internet providers AT&T and Spectrum may also offer low income internet options separate from or in conjunction with the Affordable Connectivity Program. AT&T’s affordable internet program, Access from AT&T, may even provide free internet with speeds up to 100Mbps (at a rate of $30 per month, which works out to net $0 when combined with ACP benefits). Spectrum offers a similar plan, Spectrum Internet Assist, which offers speeds up to 30Mbps, but rates may vary by household and there’s still the $5 Wi-Fi equipment rental fee.

Charlotte isn’t home to the cheapest internet plans you’ll find, but it does sport some of the fastest home internet speeds available anywhere. Google Fiber has offered multigig speeds of up to 2,000Mbps (2Gbps) in the Charlotte area for a year or so now, and AT&T recently joined the multigig club with a 2,000Mbps plan of its own, plus a 5,000Mbps plan. If neither provider is available at your address, Spectrum still offers download speeds up to 940Mbps throughout the entire Charlotte area.

What’s the fastest internet in Charlotte?

Most of the fastest internet plans in Charlotte also come with symmetrical, or at least still very fast, upload speeds. The exception is Spectrum — as a cable network, it doesn’t support the same upload speeds that you’ll get from a fiber connection. Comporium has a fiber network, but is primarily a cable internet provider as well, so there may be some locations that are not eligible for the fastest upload speeds the provider has to offer in the area.

Don’t fret over the fine print

When using a high-speed internet connection, it’s easy to consume lots of data each month, which can be a problem if you have a data cap. You won’t have to worry about that in Charlotte, however, as all major ISPs in the area come with unlimited data.

Contracts aren’t an issue, either, as AT&T, Comporium, Google Fiber, Kinetic, Spectrum and T-Mobile’s 5G home internet service do not require one when signing up.

Can you get free internet in Charlotte?

Aside from the Access from AT&T and the Affordable Connectivity Program, your best bet to get free Wi-Fi in Charlotte is at your local Mecklenburg County Library branch. Other county facilities, such as the Mecklenburg County Courthouse, may also offer a free Wi-Fi connection, as do many other public buildings such as restaurants and coffee shops. Keep in mind when using a public Wi-Fi connection that your data may not be secure, so try to avoid accessing or entering private information on your computer or mobile device when using a public Wi-Fi network.

How much is Wi-Fi in Charlotte?

Wi-Fi is a way of connecting to your internet service, not a separate service on its own, so you’ll need a standard internet connection, plus a Wi-Fi router, to get Wi-Fi in your home. Starting prices for internet service in Charlotte ranges from $30 to $70 per month, but the added fee for Wi-Fi will vary by provider. AT&T, Google Fiber and T-Mobile 5G include Wi-Fi equipment at no extra cost, meaning your Wi-Fi is essentially “free.” Spectrum charges $5 per month for Wi-Fi equipment rental, but you can skip that fee by using your own router.

Does Charlotte have Optimum or Xfinity?

No. Spectrum is the primary cable internet service provider in the Charlotte area, though Comporium may be an option for those south of the city. Optimum and Xfinity are not available in Charlotte.